The Phoenix Program – An Insiders Memoir

Almost anyone who has a little knowledge of the Vietnam War has heard or read a little something about the CIA covert operation called “The Phoenix Program”. Most of us only know that it had something to do with assassinating VC leadership. But it was a much more effective agent for changing the tone and direction of the war than the public fully understands. In his well written memoir, “ICEX Intelligence – Vietnam’s Phoenix Program”, G. LaVerne Crowell gives us a rare look at who some of those men were and what they did.

Although the author is very protective of his inner thoughts and feelings he still reveals enough about his “tour of duty” in Vietnam to give us a picture of what he and others had to endure. The book is riveting and coldly honest at times about events that took place. Crowell tells us things that are totally foreign to our own personal world (and this includes old Vietnam veterans like me).

I was there and I saw these guys flying around in those white “Air America” Hueys. They were a breed apart from the rest of those who did their tours. They worked in very small groups and carried out missions that would make for some unbelievable action movies. These guys were fighting a war in the shadows and had to carry what they did within themselves for all these years. They had the toughest job in Vietnam and had no one to tell their stories to until now!

You will find yourself totally immersed in the story that Crowell chronicles about his training and his time in Vietnam. This is a page turner not because of any fancy writing or phrasing but because the story line is so tense and full of energy. The author understates what he was going through without any embellishments to his tale.

This is a must read book! You cannot fully understand this war unless you include some understanding of these men who gave their very souls to that effort. These men are “The Real McCoy” combat veteran. The author never writes about how brave or heroic he was—but take it from someone who was there and who had on occasion dropped these guys off and picked them up from deep cover operations—they went through hell!

When I finished reading this book I wanted to embrace the author and tell him “thank-you” for his service and “welcome home”! You too will be moved to do the same thing. This book has earned the MWSA’s Highest Book Rating – FIVE STARS! This book is also personally endorsed by this reviewer .

A Western Tale of a Young Mountain Man

Vietnam veteran and author G. LaVerne Crowell takes us to a place and time in our history that many know very little about. In his second book "Mountain Trails", he takes his readers in a totally new direction than his Vietnam memoir about the legendary Phoenix Program.

It is a refreshing read about the early 1800's what life was like in the new unexplored and undeveloped parts of this country--which were still territories or not even possessions of the USA at that time. Crowell takes the reader along with his main character as he grows up on a homestead and struggles with farm duties and life before taking off on his own at a young age to explore the Rocky Mountains and become what is referred to as a Mountain Man. His young hero meets Indians and various people along his journey.

The book is more like a coming of age story for his hero as we get to see him mature and learn his way in the world. Crowell takes the reader on a fantasy tour of the past and for daydreamers like me, it a vicarious voyage of the mind and the heart to read the story. It unfolds slowly but allows you time to learn about the people in his book and what makes them what they are. We also pick up some tidbits about what life was like for those homesteaders back then and what being a Mountain Man really was about. If you like hunting, camping and the outdoors then this book will warm your heart.

It would make a great story to sit back on a cold winter day and read. The author uses a straightforward narrative to convey his story so there is no dialogue. The action flows and it is easy to follow. It is good entertainment especially if you happen to love western novels! 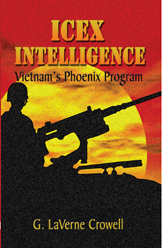